After showing a great deal of new hardware in the CES just at the beginning of the year, Asus is here delivering the goods with the newly released ROG Strix Scar II. The powerful laptop comes equipped with an Intel Core i7-8750-H processor and 16 GB of ram to make it one of the fastest offering in the market for gamers who are looking for an upgrade. 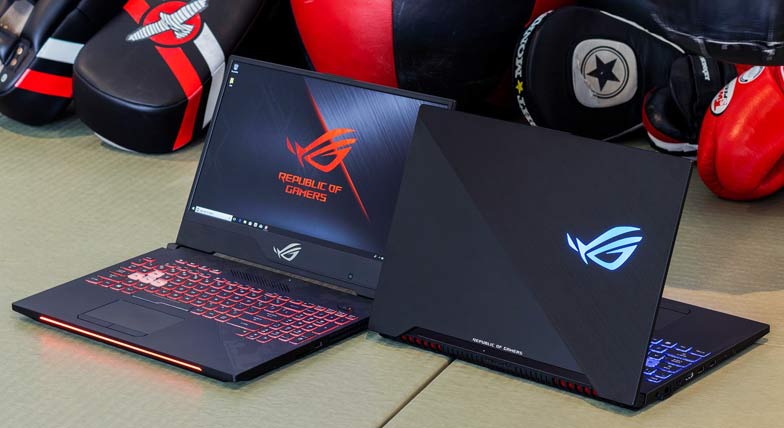 The ROG Strix Scar II is also packing the latest generation of Nvidia chips, the laptop runs with the framework of the RTX 2070, and you can see every glorious detail on a 15.6-inch screen capable of handling the full specs of 1920×1080 resolution and 144 Hz of performance rate. If you love everything, you hear to this point you might take a break when you learn the price.

The Price and the Features

The Asus ROG Strix Scar II has a cost of $2000 on release date, and it certainly is a powerful machine no matter the way you play. If you wish to install a game, the SDD can hold it without any bumps or delays. If you follow the current trend and you stream when you play, this device works gloriously with a stable internet connection.

Going back and forth on the details that make the Scar II a great machine is a great way to find faults on it too. One of the few criticisms we have with the device is the sound capabilities packed on the laptop. Loud games sound very cluttered using the regular speakers of the laptop. This can be fixed using a pair of headphones.

The Test Run With Games

The build of the machine itself is also very impressive, it may look slim just packing a 26mm chassis with thin bezels, but it feels very sturdy once it’s in your hands. We tried the machine with a few games, and this is what we found in a few popular choices. When we tried Shadow of the Tomb Raider, we could appreciate frame rates of 59 to 72 fps in a few open areas. The rates would go up as high as 85fps in closed spaces.

We also tried Monster Hunter: World and the machine was pushing a rate of 80 fps easily in open areas and never went down 55fps even when we had to engage in battles. Another test run with a high demanding game such as Final Fantasy XV was done and the machine worked perfectly fine delivering 66 to 76 fps with the Nvidia’s features set on max performance.

While there is a lot of games that can make the Scar II break a sweat, it’s nothing that can be solved by taking down a notch the quality features to get smooth performance. Games like War: Warhammer II and Assassins Creed Odyssey put some work on the processor, but they managed to reach 62 fps which still regarded a smooth performance to the human eye.

The Built of the Asus ROG Strix Scar II

Asus picked an NVMe SSD of 512 GB as the Scar II principal drive. It works pretty well, with writing speeds of 48MB per second to 99MB p/s depending on the task, it certainly proves to be superior to the SDD previous models that could handle 36MB p/s to 93MB p/s. The secondary drive is a Firecuda SSHD hybrid drive that can hold down 1 TB of data. It’s not exactly fancy, but it can give you a lot of room to store data and allow the primary drive to handle functionality alone.

The keyboard on the Scar II is also a work of art. The layout doesn’t feel dense or cluttered at all. Every keystroke works to precision, but you need to get used to it since the RGB backlit keys can get complicated if you haven’t owned a laptop before. The touch panel works based on the intensity of your commands, so make sure your fingers slide where they should.

All in all, it’s hard not to fall in love with this little piece of hardware. It’s pretty easy to get used to the mechanics of the Asus ROG Strix Scar II. There is not much choice when it comes to options to customize the exterior: you can only but it bearing a black case with camo interiors. It’s not exactly subtle, but it certainly indicates the main purpose of this machine. We hope you get a chance to test it and enjoy it!